Grand Prix Predators (hereinafter: GP) is a series of fishing competitions, which aims to select the best anglers in Polish Anglers Association fishing using a spinning method. The main organizer is Polish Anglers Association. The whole cycle consists of 6 competitions on: stillwaters, canals and running waters. All events are included in the general GP points classification.

IT IS THE OBLIGATION OF EACH PARTICIPANT TO KNOW THE FOLLOWING RULES AND FISHING MAP.

CONDITIONS FOR PARTICIPATION IN GP PREDATORS 2021.

1. The main organizer of the competition is Polish Anglers Association – hereinafter PAA. The organizer reserves the right to make changes to the Regulations before and during the competition.

2. Interpretation of these Regulations belongs to the organizer.

3. All competitors must be in possession of a valid Environment Agency Rod Licence.

4. The matches will take place in open category, i.e. juniors, seniors and women fish in one category together and compete with each other.

5. The minimum number of competitors for the match to take place is 10.

7. Juniors can participate in competitions from age of 10. Juniors under 16 (inclusive) must be overlooked by a parent or guardian throughout the competition.

8. All the rules of participation in GP Predators 2021, except for the provision referred to in point: 7, chapter: I, in these regulations apply in the same way to all participants..

12. Tickets can only be purchased via the Score Fishing platform:

13. The organizer sets a ticket price for participation in each competition.

14. The organizer gives the dates and places of each competition.

15. The organizer gives the number of tickets available.

16. PAA is not responsible for the equipment or any material losses of competitors.

17. The organizer does not provide insurance on the fishery.

18. The organizer reserves the right to prevent unsportsmanlike persons acting to the detriment of the PAA club from entering the competition.

19. Each participant is obliged to allow taking pictures of him and agrees for the pictures taken during the competition by the organizer, Media Patrons and Sponsors to be published on their Social Media and Websites.

20. During the entire competition, camaraderie and fair play rules apply.

21. Registration for the competition means acceptance of these Regulations.

The last competition of the GP 2021 cycle (No. 6) is the final of GP Predators 2021. Priority to purchase tickets is given to members of the PAA club from the top twenty in general classification.

2. The competitions will be held individually due to the pandemic. Each competitor must fish independently within a minimum distance of 2 meters from the other competitors. If it is necessary to be closer than 2 meters from another competitor, a mask or other type of face covering should be used.

3. The organizer reserves the right to change the dates and places of the competition.

4. The main regulations of GP Predators 2021 are available on the organizer’s website https://polish-anglers-association.co.uk/.

5. The organizer supervises the course of the competition and the anglers compliance with the regulations (see also point 1, chapter: VIII).

6. Protests must be notified to the organizer during the competition and no later than before the announcement of results. All information regarding irregularities or offenses reported after the competition will not be taken into account.

8. It is allowed to fish with one rod using the spinning method, using artificial lures only. It is forbidden to use multi-rig and umbrella sets.

9. Comprehensive ban on the use of grippers and spreaders.

10. It is forbidden to use boats, dinghy or any floating devices other than those indicated by the organizer.

1. During the competition for registration of results and photos competitors must use modern, special application “Score Fishing”. 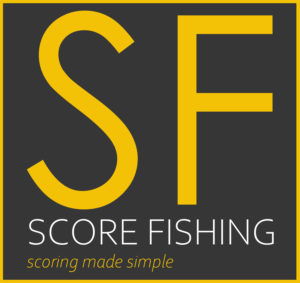 2. Score Fishing App is the official document by which the competition is being run.  Competitors responsibility is to ensure that all details are correctly entered and that the 1 official picture has been correctly taken before submitting.

3. Details in the Score Fishing App include:

Application presentation in the link below:

4. Score Fishing application is required for all. You must have it downloaded on your phone prior to competition and provide your email address to the organiser.

5. There is a charge of £1.99 per download. SF is available on Google Play or App Store.

6. To run the Score Fishing App, your smartphone requires the software update for iOS 11.0 or higher or Android 5.1 or higher.

7. Fish that are hooked elsewhere than the mouth are not included in the score and must be released immediately.

8. Precinct of the head by a line fish gill covers.

9. The scoring is based on the measurement of the fish (length) in centimeters.

10. For length measurements, points are awarded for the measurement from the head to the tip of the tail fin. Fish mustaches are not measured and are not included in the total fish measurement: 1 centimeter (cm) = 1 point

12. Every fish reported must be photographed with a measuring board and a ticket from the appropriate event.

14. The type of permitted measuring boards is specified by the organizer. The measuring board must be wide with a clearly marked scale and with the plastic, angle bar to which we place the head of the fish caught. It is allowed to use the so-called competition gutter with a measuring scale.

15. We remind all participants of the competition to have a charged mobile phone or iPad.

2. The angler who will catch all fish from the given set will receive bonus points, the big set + 50 points.

3. The angler who will catch one of each species from the given set will receive bonus points, the so-called small set + 20 points.

4. Only 20 places are scored in each competition.

6. The angler who caught the largest fish in each competition will receive 3 bonus points to the general classification of GP Predator 2021.

7. 20 places are scored in each individual competition. Points for individual places:

The table of results will be presented on the PAA website and social media.

1. In the event of a tie between two or more competitors in a given competition – the biggest fish decides.

2. In the event of a tie in general classification – the biggest fish from all GP Predators 2021 competitions will decide.

1. Competition fees are fixed and will not change until the end of the GP.

2. The organizer provides cash prizes at each GP Predator 2021 competition. For example: (1st – £100, 2nd – £50). The total sum of cash prizes will depend on the number of anglers in a given competition and it will be announced by the organizer before the competition, at the briefing.

In the event of an angler resignation from participation in the competition, the ticket fee is not refundable. It is possible to enter another competitor on the paid place. This person must be indicated by the angler who bought the ticket.

1. The main referee of the GP Predators competition is the organizer.

The Board of the PAA together with the organizer make a decision within 14 days from the date of receipt of the protest.

The organizer’s decision is final.

GENERAL PROVISIONS ON THE PROTECTION OF PERSONAL DATA (GDPR / RODO)