9. Juniors can participate in competitions from age of 10. Juniors under 16 (inclusive) must be overlooked by a parent or guardian throughout the competition.

10. During the GP1 competition at Marsh Farm Fishery, these regulations, rules of the fishery and the main rules of the Grand Prix Coarse PAA 2021 will apply.

11. The GP Coarse 2021 competition is an event open to all those willing to take part in them and regardless of citizenship and nationality.

13. Only members of the Polish Anglers Association can accrue points to the general classification of GP 2021.

15. The organizer sets the amount for participation in the competition of the sum of: £30.

16. In the event of an angler resignation from participation in the match, the ticket fee is not refundable. It is possible to enter another competitor on the paid place. This person must be indicated by the angler who bought the ticket.

17. Tickets can only be purchased via the Score Fishing platform:

19. The organizer does not provide insurance on the fishery.

20. PAA is not responsible for the equipment or any material losses of competitors.

21. Each participant is obliged to allow taking pictures of him and agrees for the pictures taken during the competition by the organizer, Media Patrons and Sponsors to be published on their Social Media and Websites.

22. During the entire competition, camaraderie and fair play rules apply.

23. Registration for the competition means acceptance of these Regulations.

2. Map of the car park and the fishery: 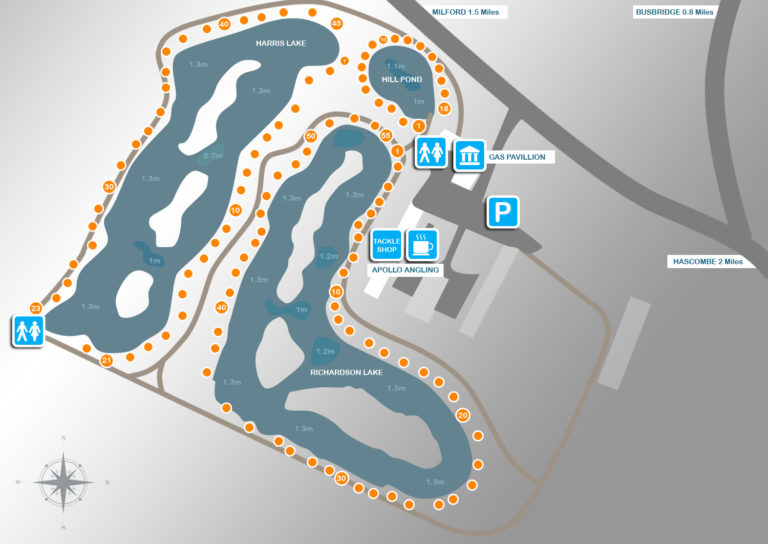 3. The competition will take place on: “Richardson Lake”

The duration of the competition: 5 hours of fishing.

7. During GP1, the principle of two keepnets for separating fish applies. First keepnet for fish of 1 pound (1 lb) or less. Second keepnet for all estimated above 1 lb. The limit in the keepnet is 40 pounds (40 lb).

8. Keepnets are provided by the fishery manager. The competitors can not use their own keepnets.

9. Keepnets and landing nets must be completely dry before fishing. For this purpose, immediately after going to your peg, place them behind. Put the keepnets into the water no sooner than 15 minutes before the start of the competition.

10. The fishery bailiff may inspect the nets. Competitors whose nets will not be dried may not be allowed to participate in the competition.

11. The weighing of the fish is performed by the weighing committee after the competition.

12. Until the arrival of the weighing committee, the keepnets remain in the water.

13. The competitor is present while weighing by comimitte. All fish to be weighed with official equipment held by the weighting committee only.

14. After weighing, all fish must be released. Competitors who fail to do so will be disqualified.

15. Weighing results will be recorded in weight units expressed in pounds and ounces (LBS / OZ).

17. There will be 3 separate classifications for general results of GP Coarse 2021, Winners of GP1 and the sector winners.

SECTORS AND GENERAL CLASSIFICATION IN THE COMPETITION – MARSH FARM FISHERY:

19. The top 3 competitors are the winners with the highest weight of fish among all sectors.

20. Competitors placed in the top 3 in the competition are not considered sector winners.

21. The sector winners are the competitors with the highest position in the sector after the top 3 competitors.

2. The winners of the GP1 competition will receive commemorative cups and diplomas.

3, The winners of the competition will receive prizes from our Sponsors (including fishing rod or a reel with an approximate value of £150 – only first place, groundbaits and baits from Teddy Fisher and SolBaits).

4. No fixed or semi-fixed weights or feeders, including elasticated method feeders.

5. All carp and tench must be land-netted. No swinging to hand.

8. The use of portable radios, or any other instrument likely to cause a disturbance or annoyance to other anglers, is not permitted.

10. All hooks must be barbless (as manufactured, not crushed barbs), with the following exceptions: size 14 and smaller, which may be barbless or micro-barbed.

11. No tins of bait, open or unopened, are permitted at the waterside.

12. No tapping the water with the pole tip.

13. Your box or chair must be on a platform or designated place, although you can put the front legs of your footplate in the water at your own risk.

14. Unused groundbaits cannot be emptied into the water or thrown onto the banks after competition.

15. Everyone who after the competition would like to stay and fish the fishery or resign from the competition and will want to fish on another lake located on the fishery, and is not a member of the Godalming Angling Society must additionally buy a fishing permit (a day ticket).

16. You need to have a hook disgorger.

18. The use of Bait-boats and / or Dinghy is not permitted.

19. It is forbidden to light a fire or barbeque.

20. A competitor must strike, play and land his own fish.

21. Competitors are asked to use the toilet located on site.

23. No alkohol. It’s forbidden to take alcoholic drinks to any Society water, or drink alcohol whilst fishing these waters.

RULES OF FEEDING THE FISH DURING GP1 COMPETITION.

9. The use of bloodworm and joker is prohibited.

10. The use of nuts of any description as bait is prohibited.

11. A competitor from the space designated for him has the right to use at his own discretion, provided that he will not disturb competitors in neighboring positions by throwing groundbait and that he will not artificially extend the shoreline. All activities should be performed by the competitor calmly and with caution.

12. In the case of juniors, the assistance of a guardian or a parent within 30 minutes after the first signal is allowed. Junior must remain under the supervision of a parent or guardian until the end of the competition.

1. The main referee of the GP1 competition is the organizer.